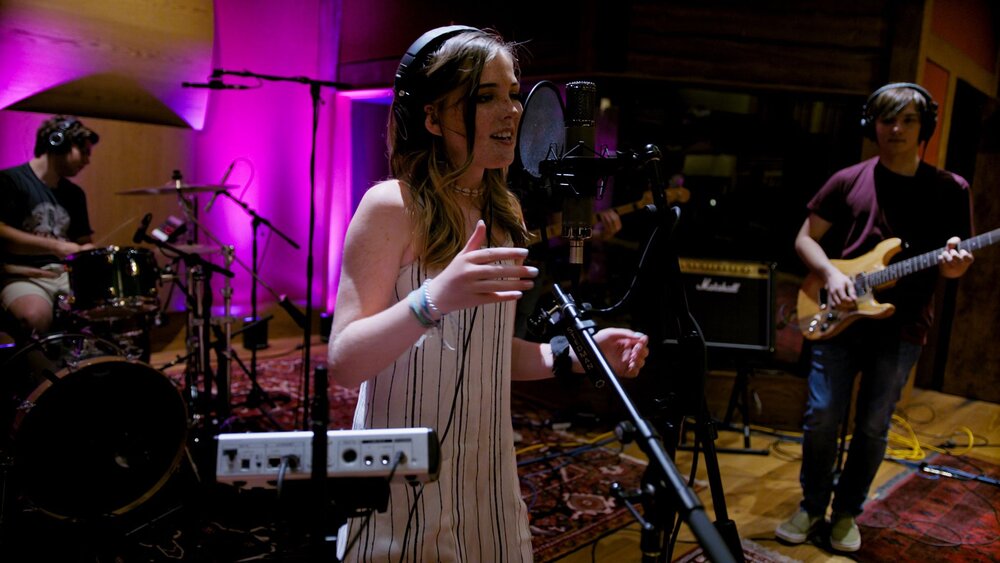 Watch the Official Music Video
Watch Behind the Scenes

For an 11-year-old, moving across the country and away from all of your friends can be a terribly upsetting experience. And while budding songwriter Emma Pierson was sad about leaving her hometown of Baltimore and moving outside of Austin, Texas, she turned to music to make it a positive experience.

“I was feeling really upset about moving, but I wanted to make a nicer way of seeing it, trying to look on the bright side and make sure that all my friends knew that I was going to keep in touch,” Emma, who is now 12, said.

That outlook inspired the sentimental, catchy pop song, “Don’t Forget to Remember Me,” which was recently released via Spotify and YouTube.

At the time of writing “Don’t Forget to Remember Me,” Emma was at Stages four nights a week for vocal lessons, guitar lessons, musical theater and band rehearsal.

A student of Stages Music Arts from age 9, Emma wrote the song with the help of her instructors, recorded in one of Stages’ studios with a student band and shot a music video live in Canton Waterfront Park with Stages’ videographer.

Stages general manager Charles Simon was struck by the song’s pop sensibility when he heard Emma perform it at a recital. 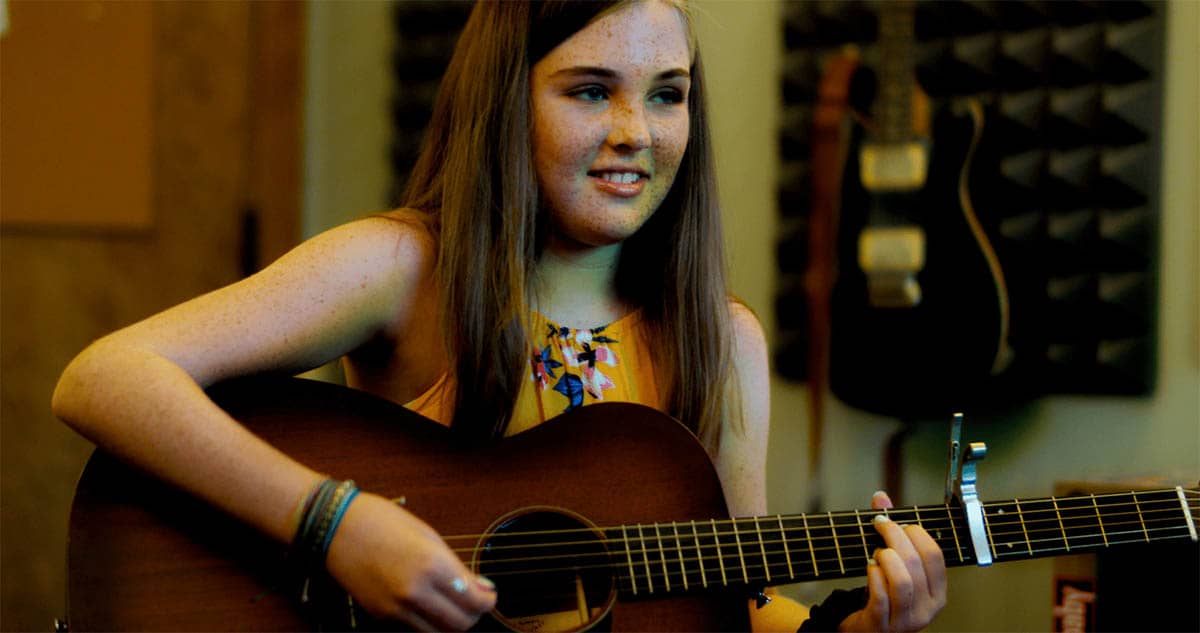 “I remember hearing it and thinking, ‘this has potential to be heard by people. It’s catchy, it gets stuck in my head. So let’s do something with this,’” he said. “It was just a good song from a commercial standpoint. It sounded like a current song.”

Stages’ motto is “learn, perform, record,” and that’s exactly what Emma did.

Musical from a young age, Emma’s mother, Cary Pierson, nicknamed her “Birdie” when she was a baby because she loved singing and performing.

“She has written songs on scraps of paper since she was about 4. Sometimes they were about hot chocolate and snowmen,” Cary said. “Probably every other day she has come to me and said, ‘Do you want to hear my new song?’”

At the time of writing “Don’t Forget to Remember Me,” Emma was at Stages four nights a week for vocal lessons, guitar lessons, musical theater and band rehearsal. She brought the lyrics, scribbled on two pink Post-it Notes to her vocal instructor, Ashley Higginbotham, who helped her craft the song.

“I just played a bunch of different things for her and she told me what was already in her mind. It was my job to bring it out so others could hear it,” Higginbotham said. “The kid’s incredible. She’s got such a good ear and such a good spirit.”

With the lyrics finished and a chord progression recorded on piano, Emma worked with her guitar instructor, Brennan McShane, who added guitars and drums to the demo using recording equipment in the lesson room.

The song would go through the full cycle of everything Stages offers – from the lesson room to the studio to the stage.

“I was blown away. Emma’s voice had really blossomed over the years,” McShane said. “She always had a great voice but she really kicked it into overdrive with this one. I thought the melody was super catchy.” 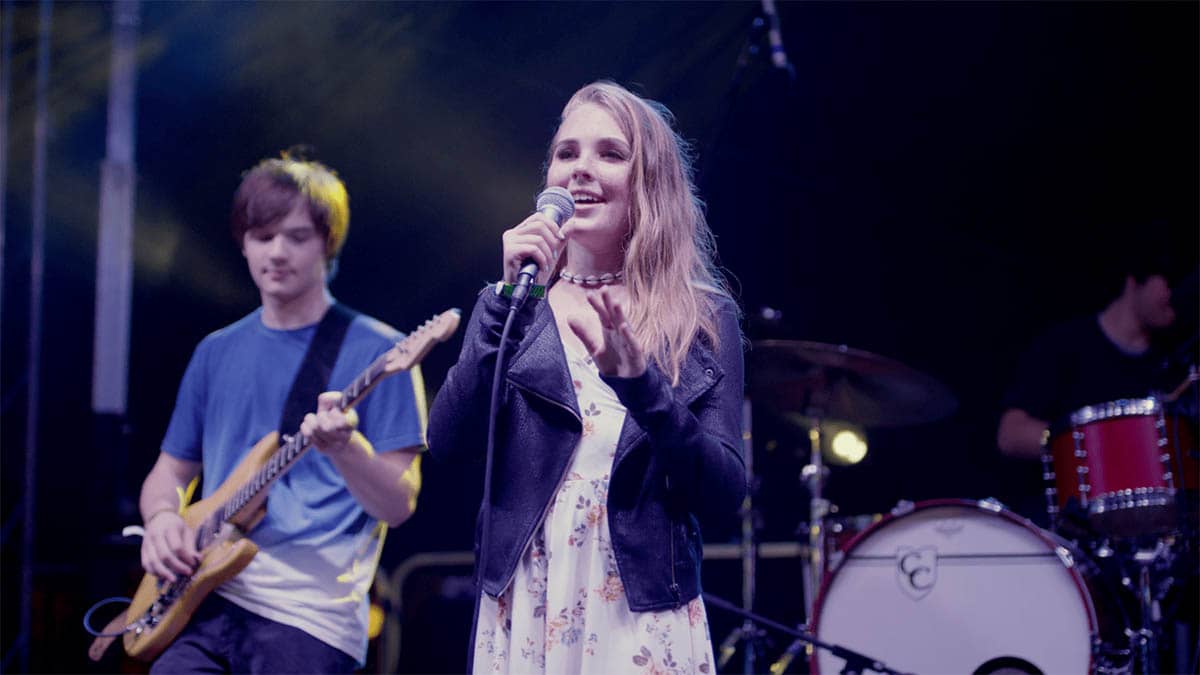 Higginbotham wrote vocal harmonies and taught them to Emma, and the two instructors sent the song back and forth until the track was complete. Emma sang the song with the recording as her backing track at her last recital before moving to Texas.

“Everyone was just blown away,” Higginbotham recalled. “Nobody had really heard it yet, not even anybody on staff.”

The song would go through the full cycle of everything Stages offers – from the lesson room to the studio to the stage.

Following the recital, Simon decided to get the Stages All-Access band – the audition-based student band – to serve as Emma’s backing band for a proper studio recording of the song.

“It was so much fun,” Emma said. “I’m just so thankful they were all helping me out.”

For the students in the All Access band, it was the first time they got to go into the studio and work with an artist on interpreting and recording their song.

“It was really a session musician experience for them,” Simon said. “It was an experience of what it’s like to be a recording artist, and working for another artist to create a good song.”

Emma and the All Access band then performed the song live at Canton Waterfront Park, captured by Stages videographer Tim Szczesniak for the music video.

“It’s a great example of the value that a music student can get out of Stages,” McShane said. “It started with a seed of an idea, and turned into a professional recording and full-feature music video.”

Stages’ motto is “learn, perform, record,” and that’s exactly what Emma did.

Now living about a half-hour outside of Austin in Dripping Springs, Texas, Emma is continuing to hone her craft with acclaimed singer-songwriters Chad and Natasha Hudson. Her dream is to follow in the footsteps of her idols Ariana Grande, Billie Eilish, Taylor Swift and Madison Beer and become a pop singer.

If her work ethic is any indication of her dedication, Higginbotham is confident Emma will succeed.

“You could tell she really cared about the time she spent focusing on her craft. She looked like a pop star and had all this confidence from the gate. But she absolutely backs it up with her work,” she said. “I think that a lot of people are going to want to work with her.”

For now, with the help of a publicist, the plan is to promote “Don’t Forget to Remember Me.”

“I hope that it helps people, if they’re going through some life experience, to see the bright side of it,” Emma said. “And I hope that it gives me a bigger audience to reach more people.”

Watch the official music video for “Don’t Forget To Remember Me,” which was filmed by Stages videographer Tim Szczesniak.

Watch Behind the Scenes

Watch how – with the help of her Stages instructors and peers – 11-year-old Emma Pierson wrote an original song inspired by her impending move from Baltimore to Texas.

Ready to start your musical journey?

With state-of-the-art lesson rooms, recording studios and inspiring teachers, Stages Music Arts offers instruction for students of all ages in guitar, bass, drums, voice, saxophone, songwriting, music production and much more, including student band performances. Call (443) 353-5300, email info@stagesmusicarts.com, or complete the following form to learn about the opportunities at Stages!

Previous PostStudio Soundbites: Joe Keyes Lays Down the Funk at StagesNext PostHome Recording on a Budget