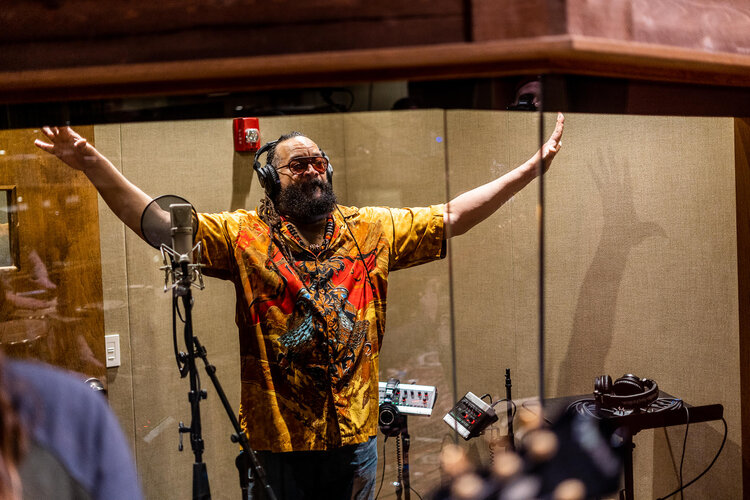 The song starts with the drone of a keyboard, with a wash of cymbals swelling behind it. Fifteen seconds in, the singer proclaims, “Let’s do it,” and the band comes in – creating a soundscape of funky guitar and bass, and rabid percussion.

The six-piece horn section comes in with a punch to round out the 12-piece funk orchestra. Group vocals led by a deep, powerful voice sing, “we’ve all got to go like we’ve come, before or after the sun…”

And that’s how “Nonamaudavis” opens the first full-length album by Joe Keyes and the Late Bloomer Band, “Tales from the Griot of Westminster,” slated for a potential fall release.

Recorded live in the studio at Stages Music Arts in February, the album proves that the band’s vibe – honed over years of theatrical, improvisational shows with stretched out solos and vocal monologues – shines bright in the studio environment.

Joe Keyes, 60, formed the Late Bloomer Band 10 years ago, modeled in the style of the funk, rock and jazz giants he idolizes – George Clinton and Parliament-Funkadelic, Sun Ra, Miles Davis and Gil Scott-Heron. A towering presence, both literally and figuratively, Keyes is equal parts frontman, poet and conductor to the Late Bloomer Band, most of the members of which are in their early to mid-20s.

“He’s the leader of the band, he’s a mentor, he’s a teacher, he’s a brother, he’s a father – he’s a lot of different things to the people in the band,” says Stages engineer Dave Nachodsky, who recorded the album. “A lot of bands don’t have that kind of personality as a leader. That struck me.”

A musician his entire life, the forthcoming album is a collection of originals from throughout Keyes’ career, covers and mashups that he dreamed up.

“I’ve always had a way of mixing and matching songs because I was a DJ coming up,” he says. “I know how to take songs and layer them.”

The opening track takes Nona Hendryx lyrics, a Bennie Maupin horn line and a Miles Davis guitar part (“Nonamaudavis” is a mashup of their three names.) Keyes taught the bassist his line by humming it. The album’s cover of Gil Scott-Heron’s “Did You Hear What They Said?” is juxtaposed over a P-Funk groove with a horn line Keyes wrote.

“There’s a science to it that only he hears initially,” Nachodsky says. “He would just tell them what to do and they would execute. It was like he was playing the band.”

“It’s a record in the true meaning of that word. It’s a record of this band at this point in time because it was done live. There were no tricks.

The album also features a cover of Minnie Riperton’s “Reasons,” a song Keyes has been singing since he was in ninth grade, and another Gil Scott-Heron cover, “Willing,” with music he wrote with a longtime musical collaborator 15 years ago.

The band recorded 14 songs, totaling more than 140 minutes. The album will feature nine of them, with the leftover tracks being saved for possible future releases.

In addition to the 12-piece band, “Tale from the Griot of Westminster” features Baltimore MC Eze Jackson and Late Bloomer Band co-founder Dave Cavalier of War on Women and Black Lung playing Afrobeat-tinged drums on “Did You Hear What They Say?”

When Keyes knew the band was entering the studio, he stopped taking gigs, allowing the band to perfect the songs they would record. And those weekly practices over the course of three months paid off, as the band was able to record entirely live, other than a guest keyboard solo and group vocals from the horn section.

The focus of the band, and that of its leader, is at least partially, if not mostly, due to Keyes’ five years of sobriety.

Nachodsky took notice, and says it benefited the recording.

“I think that focus – of people who are in their right minds – let them get into a better place musically,” he says. “Being on the other side of that experience made him stronger. And it makes the band better now than it ever was, so this is a great time to make a recording.”

Keyes decided to record at Stages studio after a friend, the father of Stages General Manager Charles Simon, told him to go take a tour.

Stages proved the perfect environment to record a band of this size live – one isolation booth for the horn section, the rhythm section in the main room, and Keyes in the other isolation booth, with sightlines so every member of the band could see and hear him as he conducted. Plus, Joe could cue horn parts and solos on the mic, as he does live, but those vocal cues could be cut out of the finished product.

As Keyes listened to the recordings during mixing, he couldn’t believe his ears.

“I am so proud of this project. When I listen to it, I can’t even believe it’s me because it sounds so big,” Keyes says. “It’s not regular good, it’s like really, really good.”

Nachodsky says, “It’s a record in the true meaning of that word. It’s a record of this band at this point in time because it was done live. There were no tricks.”

Studio-A houses a 1000 FT² live room with 19′ ceilings, two large iso rooms, and rustic lodgepole pine paneling for optimal sound quality. The 280FT² control room features a 48-Channel Solid State Logic Duality SE Mixing Console. The A Lounge is conveniently located and is equipped with a kitchen, large couch, and a private bathroom. We encourage you to visit our studios, discuss your project with us, and learn first-hand about our facilities, equipment, resources and processes. Contact us to schedule a complimentary tour and consultation!