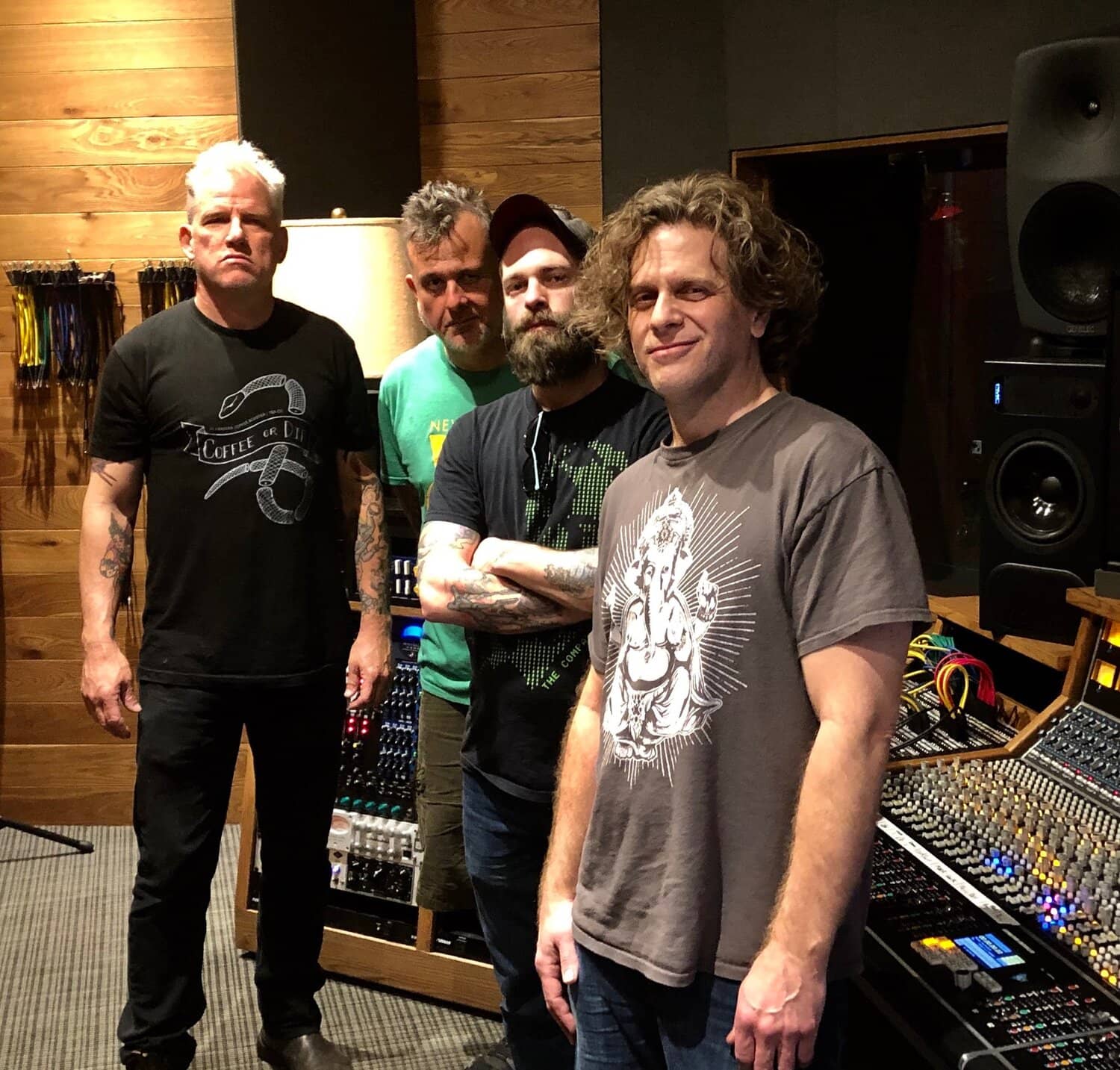 Guitarist Mark Stanley wanted to create music that he wasn’t hearing other people play. So, he detuned his guitar to reprogram his playing, wrote a batch of heavy songs that groove, and formed a sort of supergroup, Spy Machines.

He enlisted longtime friend and recent musical collaborator Jean-Paul Gaster, the drummer of Clutch, who then brought in Lionize bassist Hank Upton. After getting some songs down as a unit, Gaster suggested bringing in virtuoso percussionist and vibraphonist Mike Dillon, whose resume includes Les Claypool, Rickie Lee Jones and Ani DiFranco.

“It all came together pretty naturally,” Stanley said. “I’ve always been into the idea that if I combine the right members, the music writes itself.”

The album comes out April 3 via Weathermaker Music, Clutch’s label. It was recorded at Stages Music Arts’ Studio-B with engineer Evan Kornblum, mixed by J. Robbins of Jawbox and mastered by Paul Logus.

While the album is based in heavy rock songs, driving riffs are augmented by funk and jazz influences, with the added flavor of Dillon on percussion, who often punctuates riffs with his vibraphone. Stanley’s bandmates appropriately call it prog-funk.

“There’s definitely a lot of influences in there,” Stanley said. He tuned his guitar to CGCFGC, an open guitar tuning, a whole step down from DADGAD. “I knew if I started working in a different tuning some interesting songs would come out of it. I wanted to throw myself out of my comfort zone and dive in where I’m not thinking of theory or any kind of rules.”

“It’s just music – raw music happening. And I love that.”

Kornblum recalls that mentality carrying over into the recording sessions.

“These guys are so creative and outside of the box. It’s sometimes a rare thing to find when there’s just no walls and people play their instruments with an almost childlike wonder,” he said. “It’s just music – raw music happening. And I love that.”

The album starts off with the tight groove of “Cult of Ecstasy.” The driving riffs of “Pink Clown” feature some of Stanley’s more aggressive vocals. “Luck Be a Cyborg Tonight” features quite the special guest – one of Frank Zappa’s custom-built guitars, which Stanley plays the song’s solo on. Stanley has a friend who is a collector who loaned him the guitar, which he said was the heaviest Strat-style guitar he’s ever played. Keeping with the album’s ambitious spirit, it features a go-go-influenced cover of Queen’s “Another One Bites the Dust.”

“This was one of my favorite sessions,” Kornblum said. “The whole lineup of the band was amazing.”

Stanley said his vocals are stronger than ever thanks to vocal coach Pete Strobl, who works with a number of artists who record at Stages, as well as the likes of Van Halen.

Gaster is the one who suggested the band records with Kornblum at Stages, but Stanley had met the engineer years earlier and remembered him immediately.

“He was great with mic placement and really upbeat and optimistic,” Stanley said of Kornblum. “If things were slowing down, his positive energy would bring stuff back to life. He’s a guy you want to work with because of that attitude, and also fantastic ears.”

Kornblum loves the acoustics of the studios at Stages, and is particularly fond of the API console in Studio-B with analog circuitry. When he’s recording one project over multiple days, as Spy Machines did, he tries to avoid booking rehearsals or gigs with his own projects.

“I try to immerse myself in the recording experience with the band. You really have to be hand-in-hand for the entire process so you’re all in the same headspace,” he said. “I think that helps bring out a cohesive project because everybody’s focused.”

The acoustics were switched up a bit for this session – they rolled up all the carpets in the room to give the recording more of a live sound.

“The bulk of the recording was just live in the room,” Kornblum said. “People playing music, like a rock band.”

It was Stanley’s first time at Stages.

“I like the family vibe of the classrooms, but you can escape it by going into like Paisley Park in the other room,” he said. “It was like a little dream zone.”

What stands out to Stanley the most from the session?

“I remember how fun it was,” he said. “The whole thing really kicked ass, the whole experience.”